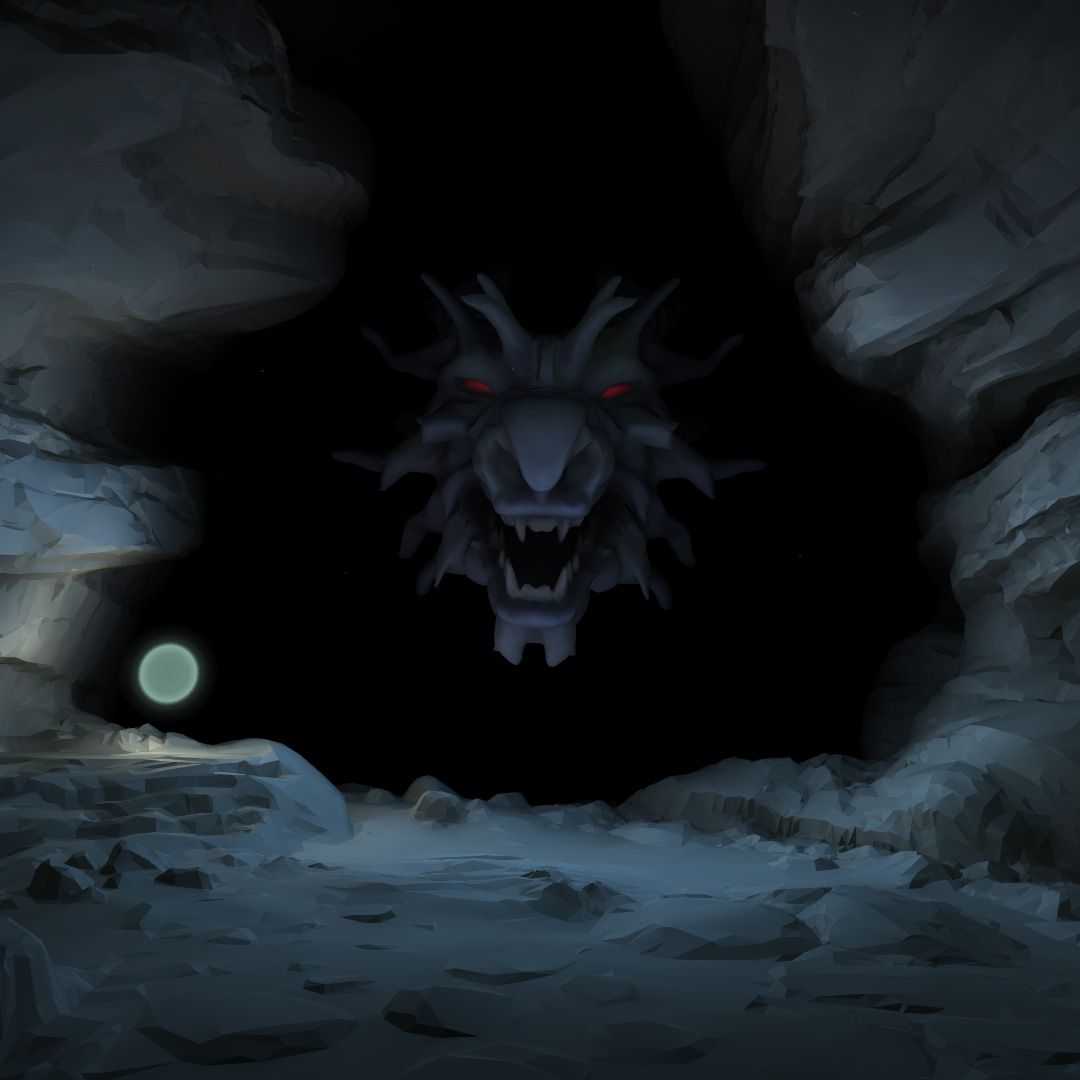 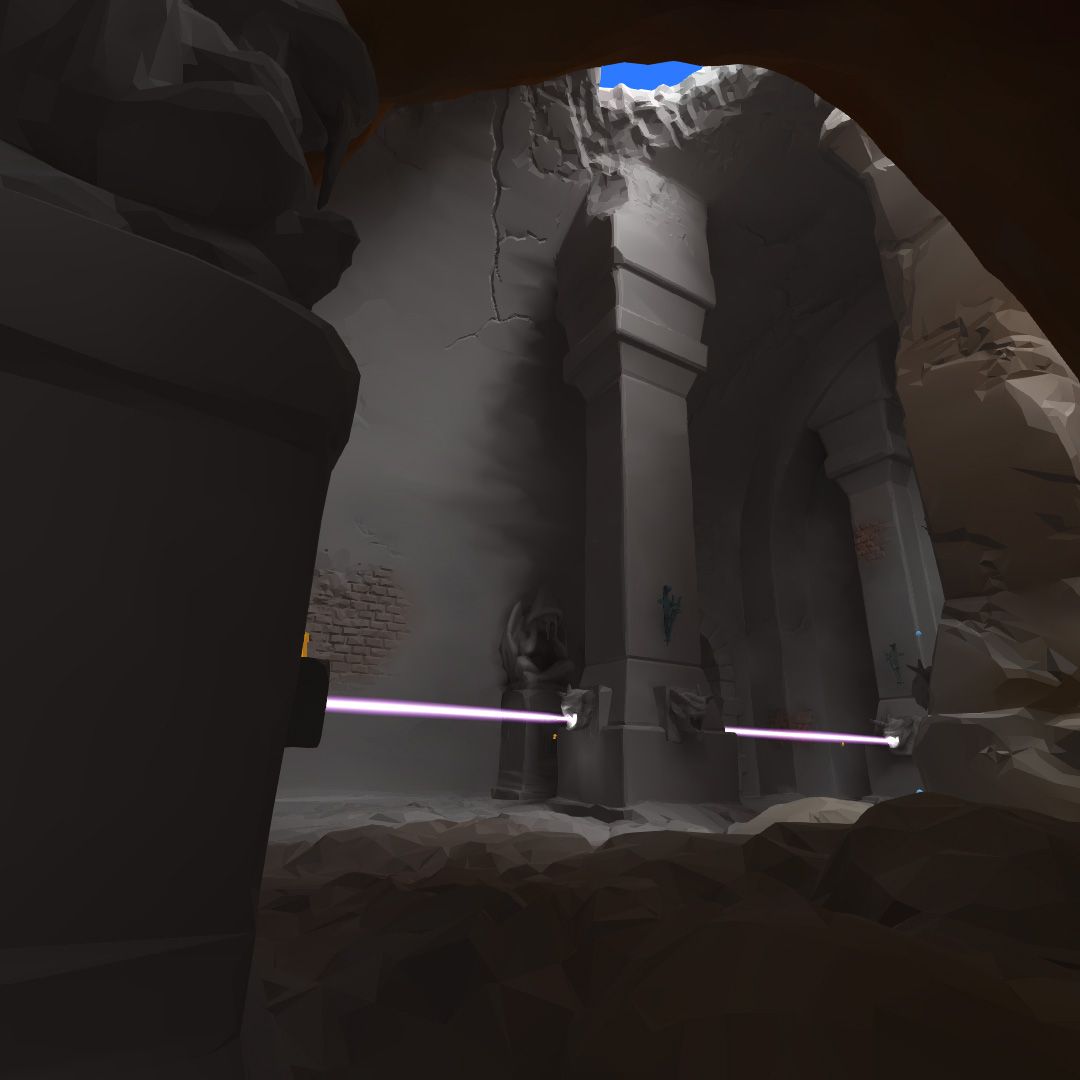 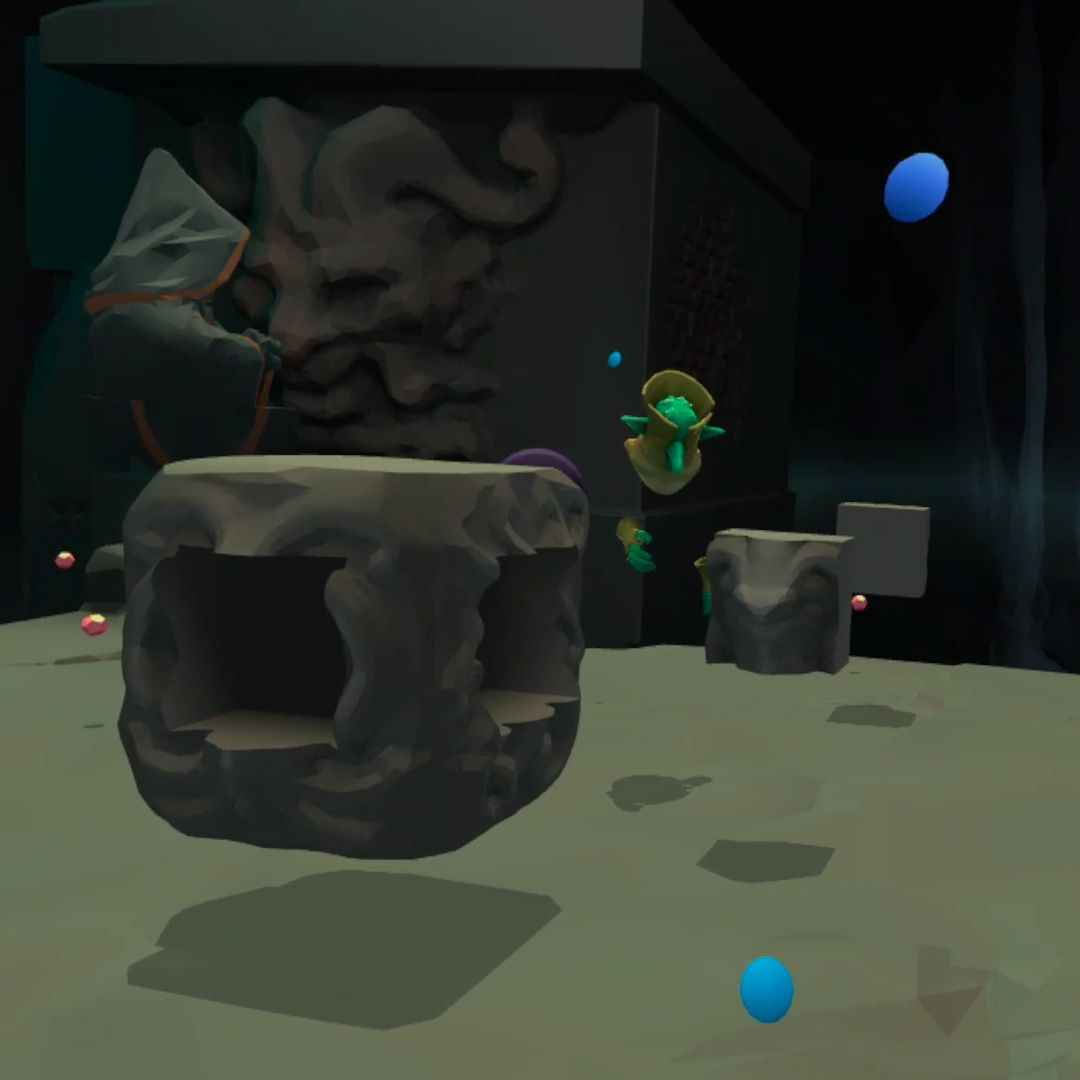 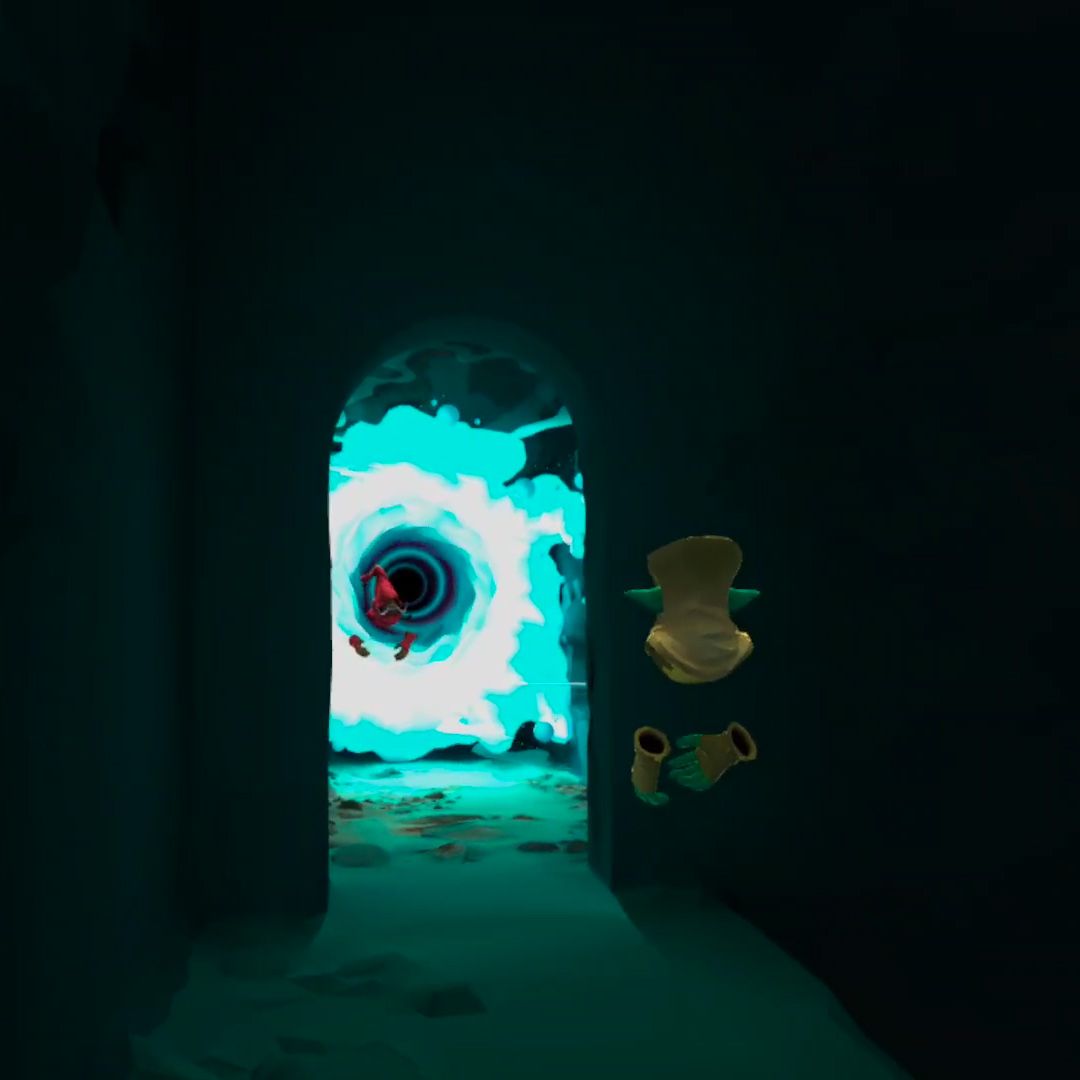 WHERE DID THE NAME ZEPHYRUS COME FROM?
Our projects are named after the Greek gods of winds. Zephyrus is the Greek god of the west wind. So the names are quite different, but they're still uniform. It was a working title in the beginning, but we liked it and we kept it.

WHAT DEVICES ARE THE GAME RUNNING ON AND IS THERE A DIFFERENCE BETWEEN THEM?
Currently supported devices are Oculus Quest, Oculus Quest 2, Oculus Rift S, HTC Vive and Windows Mixed Reality devices. Valve Index and Nolo VR support is also in the pipeline.

The only difference is that our project uses real-time shadows with a large number of polygons, so we had to find another solution on Oculus Quest 1 due to the hardware limitation. We finally found a way to display shadows under dynamic objects on Quest 1 too. It's a cheaper solution, but it visually reinforces the spatial position of the object for the player and gives them a better experience than if it wasn't there.

WHAT DOES THE PRELUDE OF ZEPHYRUS MEAN?
From the Pre-Alpha testing, the game has reached a stage where we would like to reach a larger audience, preferably from a broader group and with different player backgrounds, to get more feedback and fresh ideas to make the game as good as possible. And Prelude is an indication that this is just the beginning, the first steps of the final, larger scale game we have in mind. It will be the first milestone. In it, we intend to present the technical, artistic and game mechanics foundations. We have a lot of ideas that need to be imagined as a sea and a larger community would be our lighthouse to sail in, so that to everyone's satisfaction, all the ideas are in the right channel and direction, and our small team doesn't get bogged down in unnecessary tasks or focus in a direction that would derail the project.

At the moment, a lot of things are still deliberately simplified, I'm thinking of puzzles or activating spells, because the aim is primarily to present the experience and not the challenge, the atmosphere, how we want to present this world. The controls will evolve even further, as will the game mechanics. It should also be borne in mind that we have a small team working on this at the moment.

HOW DO I ACCESS THE 'PRELUDE' VERSION?
Zephyrus Prelude is currently available on Steam, HTC ViveStore, and Oculus AppLab.

We hope it will soon be available in as many places as possible...

HOW DO I ACCESS THE DEMO?
The demo is currently available on Oculus AppLab and SideQuest.

WHERE DOES THE STORY TAKE PLACE?
The free comic in progress reveals. If you're interested, you can read it on our Discord page.

But all I can tell you is that in this mystical, magic-infused world, a capricious Goddess is putting us to the test, and to break free, we must pass every test.

WHO ARE THE CHARACTERS IN THIS WORLD AND WHAT SHOULD THEY DO?
Players become the avatars of wizard-like characters, such as magicians, witches, other sorcerers and mystical figures. The goal is to get out of Zephyrus, but it won't be easy, as puzzles and pesky creatures will hinder players. In multiplayer mode, you have to solve tasks together. Players will be able to learn more about the games on our Wiki page as we have time to put it together.

CAN YOU TELL ME WHAT GAME MODES ARE AVAILABLE IN ZEPHYRUS AND WHAT IS THE DIFFERENCE BETWEEN THEM?
Two game modes are currently available. Single-player and local network mode (LAN / Wifi). One of the next tasks will be the online mode.

In each mode, all the working functions of the game are available, the only difference is that to complete one puzzle, you need two players to work together in the multiplayer.

WHO IS THE TARGET AUDIENCE?
In a nutshell to everyone, but actually, over the age of 10-12, we recommend it to anyone. A fantasy world that is exciting, humorous, adventurous, and yet captures the atmosphere of Grimms' Fairy Tales or the magic of Miyazaki's worlds.

HOW CAN I PLAY LOCAL MULTIPLAYER?
Very simple. All untethered VR devices or tethered VR devices with their PCs must be connected to the same Wifi Hotspot/Local Home Network. One player chooses the "Start a game for your nearby friends" in the Game menu, while the others choose the "Search for multiplayer games nearby to join" stonehead. For more details, please read our 'Setup Instructions'.

WHY DID YOU CHOOSE THIS GRAPHIC STYLE?
I can give you a more technological answer to that. With this style, we took out several mosquitoes with one stroke.

It is a significantly faster way to create or modify assets later. It can also be modified without problems in the engine, without having to touch or repair the source assets. We can use a lot more geometric detail because we have less memory usage and less load on the shaders, which also allows us to use real-time shadows and ambient lighting. This style is also better suited to the world we create, and the graphic quality remains consistent regardless of the distance. Not to mention that the game should run at optimal speed, without a PC, on Quest as well.

WHAT CAN YOU TELL US ABOUT THE CONTROL OF THE GAME?
Our original concept was designed for VR parks and then transplanted from there to the current version. You can move with the left stick and turn 45 degrees with the right stick. When moving, our Avatar turns to face the way we're looking, which means you can turn without using the stick by moving your head.

Teleportation would have had a serious impact on the game mechanics and would not have been compatible with the VR park version, and so we initially focused on stick control only. As we saw this as a major task that would take a lot of time away from the development of the game itself, we decided to address it after the game's Early Access release. This required the development and implementation of a completely new navigation system, as well as a much more accurate collision physics system for the whole environment. Retrofitting the teleport was extra work to modify and test the assets we had already created, but fortunately we overcame that obstacle as well.

We have also made teleportation an integral part of the game, so that it is not just a mode of transport, but part of the world and interesting and exciting for the player to use. We've solved this by currently activating a Magic Teleport cube by pressing the left grip, which can be discarded by releasing the grip. As well as moving the stick, teleportation is also available at the same time, meaning the player has complete freedom to choose when to use which one. There will be situations in the game where teleportation is the only solution, and teleportation itself can have its surprises, as every magic move in this world has a little bit of risk.

WHAT ABOUT MOTION SICKNESS?
This is one of the ""Achilles' heels"" of VR. For those who are sensitive to artificial motion, there is now the Magic Teleport Cube as an alternative. And for those who are only slightly sensitive, we have introduced the use of the dark hood, which the player can turn on/off at any time in the game. This reduces peripheral vision when moving.
We also have some specific ideas on how to further reduce this effect for more sensitive people. These will be implemented and tested in the next period. This is also why we need feedback from players.

WHAT ABOUT GAME’S OPTIONS?
The game currently has a very simple options menu, where you can select the language and turn the black hood on and off, which reduces the negative impact of movement for those sensitive to movement. The effectiveness of the latter varies from person to person. There are plans to develop a more detailed setup, but it is not currently a top priority.

We've also made it possible for the player to access in-game settings, which can be accessed using the left menu button on Oculus and the right menu button on other devices.

WHAT ABOUT LOCALIZATION?
There are currently 12 languages localised versions of the game. We used an advanced artificial intelligence to do this, mainly out of courage + curiosity, and to improve the localisation system itself and improve it based on feedback.

WHAT ABOUT CONTROLLING THE AVATARS?
This is another important area of development at the moment, so that players don't have to focus on control, but on the game, the environment and the strategies. That's why we have introduced the ""Magic Cube"" and the ""Magic Focus"", which is the pointer in front of the right hand that can be used to interact with the environment. This is not yet the final version, it is also under development to make it as intuitive and fitting to the game as possible.
The other major task ahead is the use and physics of the hands with the environment and magic. We will also need as much feedback as possible on these to get the best possible results.

WHAT ABOUT ABUSE IN THE ONLINE GAMING SPACE?
We also pay close attention during this development to give players different options to feel as comfortable as possible in the company of others, especially if they are strangers to them. This is important because we want younger age groups to enjoy the world of this game as well.

Currently, players can pass each other but they can't interfere with each other, because in this case, we don't display the other player's Avatar on the client. Of course, there will be an option for what the player will allow in multiplayer when the Avatars are close to each other.

WHAT’S THE NEXT STAGE OF DEVELOPMENT?
We have a Development Plan "Roadmap" where we itemize what we want to integrate into the program. We have short, medium and long term plans. Of course, the focus is always on delivering the short term ones, taking into account the medium term plans. The list will of course be regularly extended as we move forward.

If we had designed the game for only one player, it would be much easier to develop, but because of the cooperative mode, we have to pay attention to many more aspects, as we did with the puzzle system.

Copyright © 2020 by MageLoop. All rights reserved.